I’ve been part of teams that practice Agile software development methods for quite a while now. My own team at work has been doing things in an agile manner since about 2008. Before that I was a co-founder of the Agile SIG (Special Interest Group) at work for several years, attempting to bring agile into the organization from the grassroots level. I’ve been trained for the role of Scrum Master by Ken Schwaber and Jeff McKenna. I started a group of retrospective facilitators at work as well, in the hopes of turning the organization I was part of into a more consciously learning organization. Before the job at my current company, I practiced eXtreme Programming in a startup. This is (I think) my first blog post exploring some aspect of Agile software development methods.

Over the years I’ve come to realize what it is about agile that makes it work. Agile is basically a mitigation strategy/technology that addresses the human tendency to fail at communicating effectively. Let’s look at this from the perspective of a model I learned about in high school from my language arts teacher – the basic human communication model. This model comes in various forms, but I like the one from my high school years. It’s one of the few things that have stuck with me from that time: 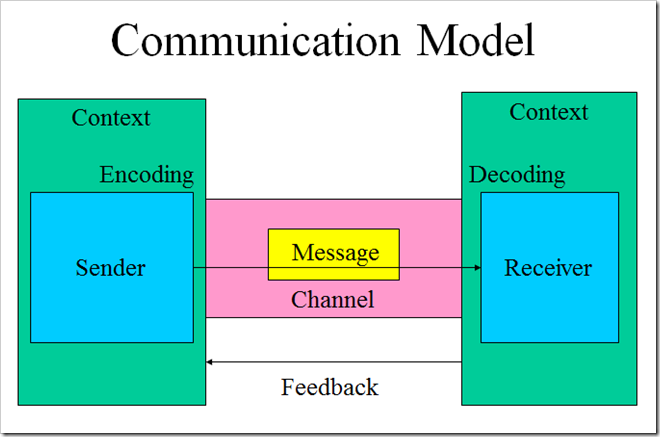 When building software, the central thing we do is to turn ideas in our head into instructions for a computer to execute. If this were a solitary exercise, there wouldn’t be much of a problem: you have an idea; you think about how to translate it into something the computer can do, taking into consideration your skills, the computer environment, your choice of software technology stack, programming language, experience, etc., etc.; you sit down for a few hours, weeks or months to design, write code, test, deploy – and you’re done! In terms of human communication there is none, so the model doesn’t really come into play.

The trouble doesn’t start until you’re working on something that takes more than one person to accomplish in a reasonable amount of time. Unfortunately, most things undertaken in software these days are of this nature. This means several things. One, there will be human communication going on! Two, the kinds of communication will take many different forms and concern many different topics. And now we’re squarely in the domain of the communication model.

Just thinking of the number and kinds of things that will need to be communicated between people can make your head spin:

And these are just some technical questions. There are others as well, more business related:

Pulling off almost any kind of software effort requires answers to these questions, and more. The nature of software development is one of producing ideas and mental constructs that can be turned into instructions for a computer to execute. If more than one person is involved in this activity, those ideas and mental constructs have to make their way from one person’s brain to another’s, so the people can collaborate to get the software built within some time limit. Agile software development methods bring to this process more formal opportunities for people to interact, increasing the likelihood of this communication happening  regularly and at varying levels of complexity, timescale and team composition.

Let’s take Scrum as an example. Scrum sets up a framework for communication and feedback like this (from high level/long timescale to low level/short timescale):

Scrum’s official rules (found in the Scrum Guide) were recently updated (in July and October of 2011) to allow for more freedom in selecting practices and experimenting with new things. So, as of the latest edition of the Scrum Guide, Release Planning is no longer part of the official Scrum rules. If it had been, I would have argued that Release Planning and the Release Retrospective provide the highest level of overall communication and feedback loop that Scrum puts in place. Since many people still use Release Planning as a tool, I think the point still holds.

Many people mix in good technical practices as well, which add things like:

Human communication tends to break down in unexpected ways. Agile software methods give people plenty of opportunities to communicate and get feedback, helping to mitigate the breakdowns that occur in the complex context of team-based software development.